To share your memory on the wall of Roger Drechsel, sign in using one of the following options:

Provide comfort for the family of Roger Drechsel with a meaningful gesture of sympathy.

Print
Roger Drechsel died peacefully of heart failure in hospice care at the Milwaukee VA Hospital on March 29, 2020. Born April 16, 1920, he died just 18 days shy of his 100th birthday. He was with family members during his last hours.

Roger... Read More
Roger Drechsel died peacefully of heart failure in hospice care at the Milwaukee VA Hospital on March 29, 2020. Born April 16, 1920, he died just 18 days shy of his 100th birthday. He was with family members during his last hours.

Roger was born in LaCrosse, Wisconsin and adopted at the age of two by Andrew and Eleanor Drechsel. Roger’s birth parents were Nellie Boyle and Carl John Kress of Lancaster, Wisconsin.

Roger is a veteran of World War II. Prior to his wartime service, he had been part of a horse-mounted Cavalry unit in Watertown, Wis. He enlisted in 1943 and was in the 94th Infantry Division. He landed in Normandy in 1944. His unit was responsible for building and rebuilding bridges and roads as part of war operations in France and Germany. His unit took part in the Battle of the Bulge. He was awarded the Bronze Star for bravery when he volunteered to help clear landmines.

Roger was an auto mechanic and met his beloved wife of 49 years, Ruth Januchowski, while working at Yellow Truck Lines in Milwaukee. The couple had two daughters, Michele (Landy Sparr) and Patricia (Raymond Look). The family lived in Saint Francis for more than forty years. Ruth died in 1997. Roger is survived by his two daughters, his grandchildren Brian (Renee), Sarah (Todd Foster) and the late Amy Look, and Nina (Spencer Morris), Nick and Cameron (Nuria) Sparr and great grandchildren Zander and Ava Look and Ona Codina Sparr.

Roger owned his own business, Roger’s Enco, on Chicago Avenue in South Milwaukee for many years. He loved cars and working on cars and he was an enthusiastic sponsor of a local stock car that ran at Hales Corners Speedway. He and Ruth, along with family and racing friends, attended many autoracing events locally and around the country.

After his wife’s death, Roger formed an enduring friendship with Dolores Tolkacz of South Milwaukee. Dolores, a resident of Howard Village in Saint Francis, survives him.
Read Less

To send flowers to the family or plant a tree in memory of Roger Drechsel, please visit our Heartfelt Sympathies Store.

Receive notifications about information and event scheduling for Roger

We encourage you to share your most beloved memories of Roger here, so that the family and other loved ones can always see it. You can upload cherished photographs, or share your favorite stories, and can even comment on those shared by others.

Posted Apr 03, 2020 at 01:10pm
You had a long and full life. We were so lucky to have you with us so long - just 18 days short of your 100th birthday. You were a loving husband, father, grandfather and great grandfather. I'm heartbroken that we didn't get to throw the party we had planned for your 100th birthday so you could have seen how many people cared about and loved you. I will miss your gentle teasing and self-deprecating humor. You were loved and will be missed.
Comment Share
Share via:
NM

Posted Apr 03, 2020 at 12:03pm
Love you Grandpa! Even though you are no longer here we will continue to remember your kindness, your laugh and your service to our country. I'm proud to call myself your Granddaughter.
Comment Share
Share via: 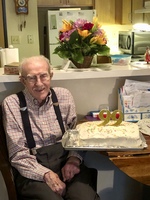