To share your memory on the wall of Gerald Kardach, sign in using one of the following options:

Provide comfort for the family of Gerald Kardach with a meaningful gesture of sympathy.

Jerry was a business owner of Videosonics and Video Emporium of Cudahy, the first dealer in the Midwest to sell Panasonic Beta recorders. He served in the Army during the Korean War and was an instructor at the South Milwaukee High School Audio Video Dept. Jerry was an usher for many years at Divine Mercy Church. He earned a Bachelor Degree in Business. He owned and operated Innovators Co. Jerry had a number of problem solving inventions with 9 patents. His pride and joy was his latest invention now selling worldwide through Amazon, his Universal Flat Screen TV shelf.

Jerry was a world traveler with his wife, going to Japan, Hawaii, Italy, Spain and Africa as well as many states coast to coast. The most memorable trip of his life was the Stars and Stripes Honor Flight to Washington DC on May 21, 2017 (his birthday). In lieu of flowers, donations in memory of Jerry Kardach can be sent to Stars and Stripes Honor Flight Inc. (PO Box 867, Menomonee Falls, WI 53052) or online to starsandstripeshonorflight.org. Jerry had a full life and touched many lives, he will be deeply missed. Special thanks to the nursing staff at St. Luke's South Shore. You made his last days comfortable and peaceful.

To send flowers to the family or plant a tree in memory of Gerald E "Jerry" Kardach, please visit our Heartfelt Sympathies Store.

Receive notifications about information and event scheduling for Gerald

We encourage you to share your most beloved memories of Gerald here, so that the family and other loved ones can always see it. You can upload cherished photographs, or share your favorite stories, and can even comment on those shared by others. 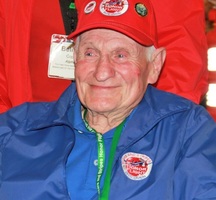