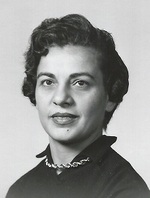 Efkina (nickname Yevkine, also known to many as Effie) passed away peacefully on a sunny Sunday, surrounded by loved ones, after a long battle with Parkinson’s disease. Yevkine was born in Istanbul, Turkey, in 1927, the youngest of three girls. When she was 18 months old her mother passed away. Her father passed away when she was five, and she grew up in an orphanage with her older sister Hasmig. As a young adult, she lived in a one-room flat with Hasmig and her sister Dikranuhi, who worked at a private Austrian school just so Yevkine could attend eighth grade. Yevkine went on to nursing school, and after working as a private nurse to the daughter of the US Ambassador to Turkey, the Ambassador sponsored her to come to the US to further her studies. She arrived in New York City on August 27, 1954, not knowing a word of English. She learned the language, earned her degree, and eventually worked in nursing in Chicago, where she met her husband, Harry Karian. They settled in South Milwaukee, WI, and had three children. She went back to college in 1972, earned her RN degree, and worked at Trinity Memorial Hospital in Cudahy, WI, for 18 years.

Yevkine was a woman of strong faith, and was an active member of the Holy Resurrection Armenian Apostolic Church. She was preceded in death by her husband of 45 years, Harry Karian, her two dear sisters, Hasmig and Dikranuhi and her sisters-in-law Margaret Baylerian and Patricia Karan. She leaves behind her proud children, Sharon (Brad) Felber, Jeanie Karian, and Greg Karian, along with her grandchildren: Nicholas (Jessica) Bitzke, Elizabeth and William Azizian, Tyler, Madeline and Elijah Karian, and David and Brittany Felber. She was also a great-grandmother to Lucas and Logan Bitzke, sister-in-law to Eleanore Karian, aunt to several beloved nieces and nephews and a dear friend to many. Yevkine will be remembered for her kind and grateful soul, her proud heritage, her delicious cooking and beautiful handiwork.

A private service will be held on Wednesday at Holy Resurrection Armenian Church for immediate family. Yevkine will be buried in St. Haroutune Armenian Cemetery in South Milwaukee, WI. When safe to do so, there will be a celebration of her life at a later date. Yevkine’s family would like to give special thanks to the staff at Linden Heights , Pro Health Hospice, and Linden Court in Waukesha, WI, for the care she received.

In lieu of flowers, donations can be made to the Society of Orphaned Armenian Children (SOAR) at www.soar-us.org.

All rights reserved. This obituary is also archived at obittree.com