To share your memory on the wall of Donald Stolpa, sign in using one of the following options:

Provide comfort for the family of Donald Stolpa with a meaningful gesture of sympathy.

Don was born on July 09, 1935 in South Milwaukee to Marie (Pacznesy) and Edward W Stolpa. He was married to Maureen 'Reenie' (Zimmerman) for 62 years. Together they raise... Read More
Donald J Stolpa, age 84, passed away peacefully on April 06, 2020.

Shortly after being married, Don served in the Army at Fort Rucker, Alabama for 2 years.

After returning from the military, Don bought Ideal Hardware in South Milwaukee from his father, which he ran until he sold it in 1979. Don and his family moved to Louisiana to enjoy a warmer climate. While in Louisiana, Don worked as a salesman until he retired at the age of 57. Him and his wife set out to see the great United States. Don and Reenie spent the next 9 years living out of their motor home seeing all 48 of the lower states. He even found time to travel a few times to Europe.

Don always found time to volunteer. He was active in the South Milwaukee Jaycees and the South Milwaukee Kiwanis. After moving to Louisiana, he found time to then join the Alexandria Kiwanis, and the Knights of Columbus as a Third Degree Knight. Don could always be found ushering at whatever Catholic church he called home. He was even called to usher at the first mass after his marriage to Maureen.

Even when he lived out of state, he always loved the Packers as well as the Brewers and watched them as much as possible.

Don was preceded in death by his parents and his brother Edward G.

A special thank you to the staff at Clifden Court and St Croix Hospice Care for the care they gave Don in his final days.

Private services will be held at a later date.
Read Less

To send flowers to the family or plant a tree in memory of Donald John Stolpa, please visit our Heartfelt Sympathies Store.

Receive notifications about information and event scheduling for Donald

There are no events scheduled. You can still show your support by sending flowers directly to the family, or planting a memorial tree in memory of Donald John Stolpa.
Visit the Heartfelt Sympathies Store

We encourage you to share your most beloved memories of Donald here, so that the family and other loved ones can always see it. You can upload cherished photographs, or share your favorite stories, and can even comment on those shared by others.

Posted Apr 09, 2020 at 03:09pm
Dear Reenie & Family - So sorry to hear of Don's passing and extend our deepest sympathy to you all during this trying time. Sending love and prayers - Ken and Jane Hanson
Comment Share
Share via:
L

Posted Apr 09, 2020 at 07:17am
Please accept my sincere condolences. Although it's difficult to see beyond the sorrow, may looking back on memories help comfort you tomorrow. Look forward to the wonderful promise when we will meet again that promise is found at John 5:28, 29.
Comment Share
Share via:
RS

Posted Apr 08, 2020 at 04:20pm
Randy and I are so sorry for your loss. Don was a kind, mild mannered man and was truly blessed to have such a beautiful family.
I believe tears can heal, memories can comfort, Love lives on forever. Keep him tucked inside your heart, he will always be with you. 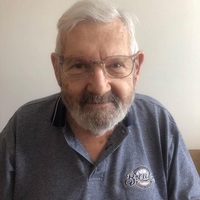